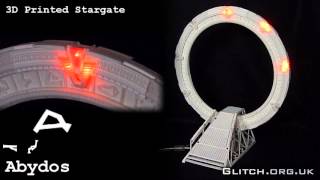 All the pieces for the stargate have been printed and assembled. Although the additional gearing for the top chevron can be moved from the base by hand. The stepper motor is unable to budge it.

Also I noticed the stepper motor driving the symbol ring will stutter if the ring and track it rides in are not completely smooth. It’s best to sand down the joints as even a slight lip can cause issues. Trying to take the model apart once glued together isn’t the easiest job.

In good news, the additional pieces for self calibration work as expected. The gate is able to reset to the ‘Earth’ symbol on top for which all dialling calculations are based. The full calibration, which also calculates the steps per symbol takes about four minutes. A short video of the last ten seconds of calibrating are included below for reference.

Since a larger base was required to accommodate two stepper motors, I’ve designed the new base to look more like the ramp from Stargate Command. Some tweaks are required in the design. The base does fit the build plate of the Makerbot 5th gen in one piece, but due to curling I’ve split it into two pieces.

The gate itself is the same size as the original gate I uploaded to Thingiverse in 2013. However there is less room inside the gate due to the additional parts for the moving chevron. For this reason I’ve used surface mount LED’s; a total of 27. They’re a little harder to solder by hand, but not impossible. It also means each chevron is wired back to an output pin on the Arduino rather than having just one output.

The code is written to handle any length address from 1 to 9. See the videos below to see the difference in how the chevrons light up for 7, 8 and 9 symbol addresses. If you dial a nine symbol address and don’t use Earth as the ninth symbol the ninth chevron will not lock (as a homage to SGU).

Dialling a nine symbol address with the wrong ninth symbol